It all began in the winter of 1994 at an auction house in Pennsylvania, where Bill (father) and Steve (son) McNeal, both certified auctioneers, held public auction every Friday. On this particular weekend, they were approached by a gentleman with a Chipmunk® .22 caliber rifle in hand. Both Bill and Steve were impressed by the look and the feel of the rifle, how compact and attractive it was, and the fact that it was made especially for youth shooters.

Subsequently a phone call was made to the manufacturer to see if rifles could be purchased. Instead, the owner asked if Bill and Steve would be interested in purchasing the company. They decided to take advantage of the opportunity; however the acquisition never materialized because of a situation that arose with the seller. Bill and Steve decided to manufacture their own rifle. Working with design engineers, consulting gun manufacturers, and trademark experts, they created the Davey Crickett® single shot .22 caliber youth rifle and secured the rights to the logo, “My First Rifle®”, “Crickett®”, and “Davey Crickett®”.

Keystone opened its doors in January 1996, with only four employees. The business started as a family owned and operated company; and that year 4,000 Crickett® rifles were produced. Since then KSA has exhibited constant annual growth.

In 2007, the company made two major purchases:

The first purchase was a competitor, Rogue Rifle Company in Oregon, who was the original maker of the Chipmunk® rifle. With this purchase KSA absorbed its biggest competitor and moved to the forefront in becoming the leading rifle supplier in the youth market. 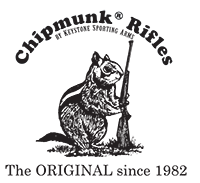 The second purchase was Revolution™ Stocks in New York, which was owned by Revival Industries, a stock manufacturer who provided KSA with most of its stocks. Revival had also created a line of after-market stocks, named “Revolution™” for rifles such as the Ruger 10/22. These were beautifully made wooden stocks, with great style, detail, & quality, manufactured as an upgrade or replacement stock.

Then in 2008, KSA re-located to a 31,000 square foot facility in the Milton Industrial Park, Milton, Pennsylvania. The company is equipped with modern, state of the art equipment, and a capability to increase production to meet the growing demand for firearms. KSA continues to grow, producing 60,000 Crickett® and Chipmunk® rifles in 2008. Currently KSA employs 70 people, and in Sept 2009 completed a 45,000 square foot addition to accommodate existing production and new projects.

At the present time, KSA produces:

The goal of KSA is to instill gun safety in the minds of youth shooters and encourage them to gain the knowledge and respect that hunting and shooting activities require and deserve. Thank you for considering our products. We will continue to provide great customer service, and build quality, made in the U. S. A. products